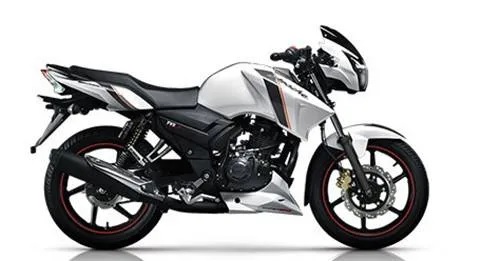 For your information, the indigenous bike manufacturer sells the RTR 160 alongside the RTR 160 4V. There is a price difference between the two. Therefore, needless to say, “you get what you pay.” But let’s digress on that. The Apache RTR 160 has distinctive looks along with a different engine, and that too with less engine output than its fourth version (4V). However, the RTR 160 is a proven 160cc bike, becoming one of the bestselling TVS bikes in the country. It won’t let you lament its offerings, whether they are features or dynamics. You’ll get the whole package by signing a cheque for the top-of-the-line variant. That said, if you are looking to buy the top model of the RTR 160, below are a few things that you should know:

Despite that, the predecessor of the 4V shouldn’t let you complain about the performance it offers. The Apache RTR 160 has a robust underpinning: a TVS in-house Double Cradle Synchro Stiff chassis, which offers flawless stability and favours other riding dynamics. This chassis is seen on the RTR 160 4V as well. Further, under the chassis, the RTR 160 has a single-cylinder, air-cooled, 159.7cc engine that churns out 15.31 bhp at 8,400 rpm and 13.9 Nm at 7,000 rpm. The indigenous bikemaker has coupled the engine unit with a standard five-speed manual transmission. Also, if you don’t want the Apache RTR 160 with an air-cooling system, you can consider its fourth version (the 4V), which has an oil-cooling system. In a country where there is an excess of heat, the two-wheeler should have either an oil- or liquid-cooled system. Furthermore, the BS6 Apache RTR 160 features fuel injection technology. Given that, it makes the engine more fuel-efficient and less polluting.

The 2022 iteration of the TVS Apache RTR 160 has three riding modes, unlike its predecessor. Those include sport mode, urban mode, and rain mode. In sport mode, this bike runs on full throttle, giving it full performance. However, the rest of the ride modes make this 160cc bike run on low revs and throttle. It churns out 15.64 bhp at 8600 rpm and 14.14 Nm of peak torque at 7250 rpm.

To your knowledge, the central government of India ordered all the bike manufacturers to make BS6 engines with fuel injection technology for the fuel supply system.

As mentioned earlier, the Apache RTR 160’s engine comes with a five-speed manual transmission. The clutch for this transmission incorporates a wet multiplate. Since the multiplate is lubricated, it reduces wear and tear, making the gearbox more durable.

Further, this 160cc bike from TVS stores its fuel in its 12-litre fuel tank. The Apache RTR 160 achieves an average mileage of 46 km/l. Please note that this is an average figure reported by the owners of the RTR 160 across India. Moreover, the real-world mileage may still differ with local traffic conditions and individuals’ riding styles.

As for the suspension setup, the TVS Apache RTR 160 shouldn’t let you complain about rideability as it is comfort-oriented. On the front-end of the bike, you will get telescopic forks with hydraulic dampers. And the rear end has a monotube and an inverted gas-filled shock absorber. Given that, the bike can absorb bumps with ease. It is nimble around the corners and offers better stability than the conventional suspension setup.

In short, this TVS bikes can encounter any hindrance. That said, the TVS Apache RTR 160 won’t be uncomfortable during long trips, either.

Moreover, the higher variants of the TVS Apache RTR 160 have disc brakes. And when they work in tandem with the offered suspension setup, they won’t let you down. It will reduce the chances of mishaps. But, the indigenous bike manufacturer has offered single-channel ABS as standard across the variants. Had it been dual-channel ABS alongside dual disc brakes and the given suspension setup, it would be as premium as it would get.

But considering the RTR 160 price, the bike manufacturer could have provided dual-channel ABS, especially on the top model.

Now, let’s jump to the features of this bike.

Apart from those, the top-most model of this bike has an all-LED light setup. The front LED lights with LED DRLs make the bike’s front fascia look more aggressive. As far as the headlight is concerned, this homegrown two-wheeler also offers automatic headlights.

Further, the Apache RTR 160 has in-built Bluetooth, allowing the TVS owner to pair their smartphone with the bike. For further access to the bike’s status, the owner has to download the TVS SmartXonnect app, which allows the user to check upcoming service(s), live location, last parked location, fuel level, engine oil level, and battery life, to name a few. However, this bike misses out on the USB charging port.

The indigenous bike manufacturer sells this 160cc bike in three variants: Drum, Disc, and Disc-Bluetooth. And as far as the Apache RTR 160 price is concerned, it starts at Rs 1.17 lakh for the base model, Drum, and goes up to Rs 1.24 lakh for the top-of-the-line variant, Disc-Bluetooth. All are ex-showroom prices, New Delhi, as of January 2023.  Please note that these prices are subject to change without prior notice to the customer. But don’t worry. You can always access your dream vehicle’s latest location-based price list on the autoX website.